When looking at an account in the general ledger, the following is the debit or credit balance you would normally find in the account: 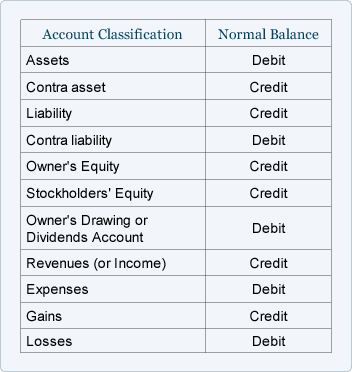 Revenues and Gains Are Usually Credited

Revenues and gains are recorded in accounts such as Sales, Service Revenues, Interest Revenues (or Interest Income), and Gain on Sale of Assets. These accounts normally have credit balances that are increased with a credit entry. In a T-account, their balances will be on the right side.

Let’s illustrate revenue accounts by assuming your company performed a service and was immediately paid the full amount of $50 for the service. The debits and credits are presented in the following general journal format:

Whenever cash is received, the asset account Cash is debited and another account will need to be credited. Since the service was performed at the same time as the cash was received, the revenue account Service Revenues is credited, thus increasing its account balance.

Let’s illustrate how revenues are recorded when a company performs a service on credit (i.e., the company allows the client to pay for the service at a later date, such as 30 days from the date of the invoice). At the time the service is performed the revenues are considered to have been earned and they are recorded in the revenue account Service Revenues with a credit. The other account involved, however, cannot be the asset Cash since cash was not received. The account to be debited is the asset account Accounts Receivable. Assuming the amount of the service performed is $400, the entry in general journal form is:

Expenses and Losses are Usually Debited

Expenses normally have debit balances that are increased with a debit entry. Since expenses are usually increasing, think “debit” when expenses are incurred. (We credit expenses only to reduce them, adjust them, or to close the expense accounts.) Examples of expense accounts include Salaries Expense, Wages Expense, Rent Expense, Supplies Expense, and Interest Expense. In a T-account, their balances will be on the left side.

To illustrate an expense let’s assume that on June 1 your company paid $800 to the landlord for the June rent. The debits and credits are shown in the following journal entry:

Since cash was paid out, the asset account Cash is credited and another account needs to be debited. Because the rent payment will be used up in the current period (the month of June) it is considered to be an expense, and Rent Expense is debited. If the payment was made on June 1 for a future month (for example, July) the debit would go to the asset account Prepaid Rent.

As a second example of an expense, let’s assume that your hourly paid employees work the last week in the year but will not be paid until the first week of the next year. At the end of the year, the company makes an entry to record the amount the employees earned but have not been paid. Assuming the employees earned $1,900 during the last week of the year, the entry in general journal form is:

As noted earlier, expenses are almost always debited, so we debit Wages Expense, increasing its account balance. Since your company did not yet pay its employees, the Cash account is not credited, instead, the credit is recorded in the liability account Wages Payable. A credit to a liability account increases its credit balance.

Temporary accounts (or nominal accounts) include all of the revenue accounts, expense accounts, the owner’s drawing account, and the income summary account. Generally speaking, the balances in temporary accounts increase throughout the accounting year. At the end of the accounting year the balances will be transferred to the owner’s capital account or to a corporation’s retained earnings account.

By having many revenue accounts and a huge number of expense accounts, a company will be able to report detailed information on revenues and expenses throughout the year.

T–accounts, Journal Entries, When Cash Is Debited and Credited